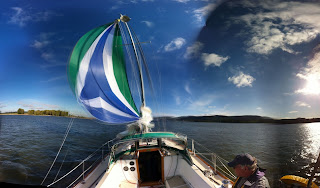 Several images from an iPhone stitched together, sailing upriver on the lower Columbia near Martin Island. 10 knots of wind giving us 3 knots over the ground against a 2 knot downstream current.
Posted by Jay Kerr at 10:11 AM No comments: 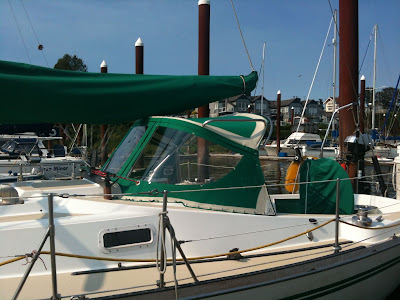 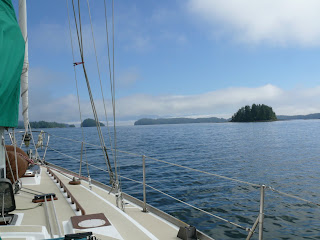 We left Ucluelet on a beautiful sunny day and set sails in a nice 10 knot NW breeze, bound for our first anchorage at Turtle Bay. We crossed Sargison Bank (reputed to be a great fishing spot) and entered Loudoun Channel proper. It was already afternoon, and we enjoyed an easy downwind run West by North, passing the Turtle Island group to starboard before bringing the wind to the starboard quarter for the run westward up Peacock Channel toward the pass into the bay.

The wind was so nice and the day so enjoyable that we were not quite ready to see it end. So as we ran out of sea room near Keith Island we came about onto the port tack and beam reached back out into the channel. Finally, the westering sun forced us to drop sails and motor in through the northeastern gap in the circular chain of islands that form Turtle Bay. The bay is quite large and totally protected, offering a multitude of anchoring choices. We opted for a quiet spot behind a small islet north of Turtle Island, our nearest neighbor several hundred yards away.

Our first evening on the hook was highlighted by an extended cocktail hour, most of the crew enjoying a warm evening in the cockpit while Muki prepared the first of many great dinners. It had taken multiple carries to transfer the supplies the girls had brought to Uclewlet from car to boat, and now we had to focus on consuming vast quantities of gourmet dishes that Muki produced in a steady stream. 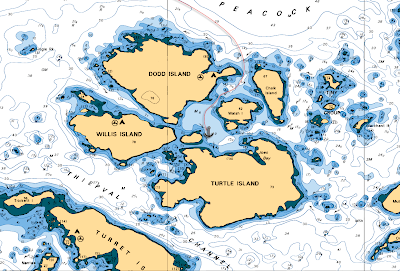 Turtle Bay was a quiet place the night we were there, with two other sailboats anchored on the north side of the bay, a couple of power boats snuggled into small coves on the south side, and Betty Lou occupying the center. Six islands of various sizes in a rough circle form the bay, offering lots of great exploring by dinghy or kayak. Slip out through any of the passes to find great little stone and shell beaches with views out into the sound.

We motored out of the bay the next morning without a firm itinerary, except that we would end the day at another protected anchorage at Nettle Island. The morning was windless, so we continued under power to Sand Island and did a slow circumnavigation. Muki, Scott and I had spend several days camped here in 1988 while on a sea-kayaking visi to Barkley Sound. Our oldest daughter Chelsea was with us then, already a veteran kayaker at the tender age of 2. Sand Island is one of several in Barkley Sound with designated campgrounds, and we had a great time there. The campground is in a meadow in the center of the small island, and trails lead off in three directions, each to a separate perfect beach. 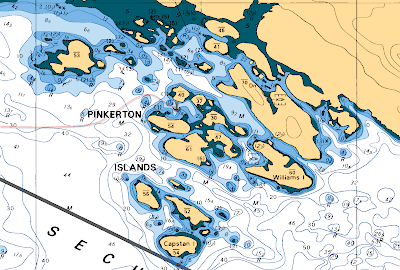 Leaving Sand Island, we shaped a course towards the Pinkerton Group. We had on board a chart of the area used by Betty Lou's previous owner, Tom Schneider, on his trip to the sound years earlier. There were several intriguing locations marked on the chart in this small, compact group of islands, and we needed a place to drop the lunch hook. The Pinkertons are nestled up close to the mainland at the north end of the sound, and offer several secluded anchorages for one or two boats and great dinghy or kayak exploration in the narrow passages between the many many islands. We followed decades old pencil lines drawn on Tom's chart into a shallow bay, then carefully and slowly eased Betty Lou into a tiny rock-line cove and dropped anchor in two fathoms. 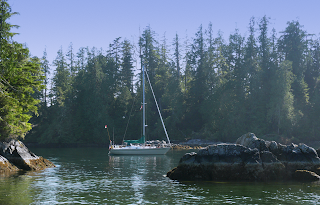 The day was warm, sunny and windless. The crystal-clear water was just too inviting, so Tim, Scott and I took the dinghy to shore for a swim. Tim donned his wetsuit, mask and fins, while Scott and I just stripped to the skin and dove in. The water was warm in the sun-dappled shallows, and we swam and dove along the shore for an hour. I finally swam back to Betty Lou, lured by the promise of a cold beer and hot lunch. We spent most of the afternoon lying about the deck and cockpit, never seeing another boat.

Tom's old chart still has a couple of other secret spots marked in the Pinkertons, and I plan on checking them out the next time we come this way. But for now, we are off to Nettle Island. The anchor chain rattled its way down into the chain locker and we eased out of the narrow entrance cut, heading southeast down Sechart Channel toward our next anchorage at Nettle Island. 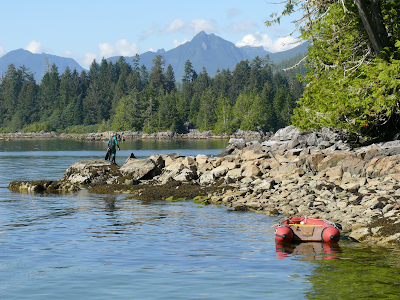 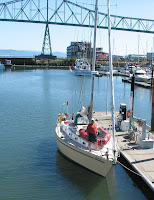 In August, 2007, we sailed Betty Lou from St. Helens, OR to Barkley Sound, BC, on the west coast of Vancouver Island. Scott Shuey and I spent the first two days motoring down the Columbia River. We spent the first night at the small village of Cathlamet at Elochoman Marina. Cathlamet is a sleepy little town, and the marina is a quiet spot with great showers. There is a riverside trail into the downtown area, where there are several watering holes and resturants. We got an early start the next day for Astoria to avoid the afternoon onshore breeze, which can make for a bumpy ride when it meets the downstream current. We were tucked into West Basin in Astoria by 1300.

We spent the rest of that day and the next doing last minute projects. We went up the mast to change the deck light, and added new fittings on the boom for the slab reefing system. Tim Hyrciw joined us, and our crew was complete for the trip up the ocean. We fueled the boat and were ready for a pre-dawn departure to hit the bar crossing at slack water before the flood tide. 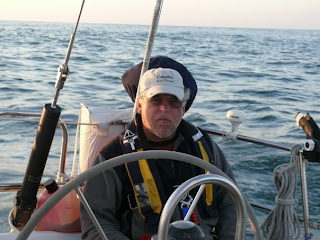 We pulled out of West Basin into a very dark night at 0430. It was raining lightly, with a 10 knot breeze. Our timing for the bar was perfect, conditions were mild, and we motored out into the Pacific, turning north once we passed CR Buoy # 1. The NW swell was big, about 12 feet, and Betty Lou rose to each crest about every 14 seconds. What wind there was was on the nose, so we motored up the coast all the way to Barkley Sound.

We passed through the traffic lanes exiting the Straits of Juan De Fuca during Tim's midnight watch. At about 0200 he woke me to man the radar. We had a large vessel crossing our track ahead, and a tug and tow gaining from astern, but 15 minutes of plotting with the radar assured us that we would pass well clear of both. I tumbled back in my sea berth and was back asleep in seconds. 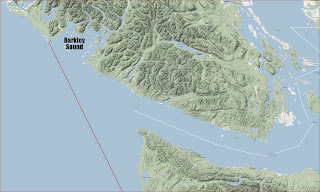 Tim turned me out again for my watch at 0345. I came out into the cockpit armed with a fresh thermos of coffee. Slowly, the dawn light revealed the rugged mountains of Vancouver Island. The coastline was obscured by a thick bank of fog. Our landfall would be the small community of Ucluelet, and we were right on schedule for docking at 0800. But the fog would make things interesting. The channel threaded between a rocky headland to the north, and a dangerous reef to the south. I roused the crew at 0600, and we debated whether to risk the fogbank. 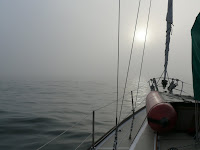 We could hear the bell of the outermost buoy, our chartplotter had us right on track, and the radar was painting a pretty clear picture, so we decided to ease our way in. We motored slowly toward the ringing bell. Visibility was maybe 100 yards, and finally the buoy appeared out of the murk. I made a course change to follow the channel, slowed to 3 knots, and we heard to breakers to our right and left over the drone of Betty Lou's engine. Suddenly a large sport fisher came out of the fog towards us, doing maybe 15 knots, and passed us off the port side. A minute later another went by to starboard, seemingly unconcerned with the pea soup conditions.

We passed within 50 feet of the second channel buoy and a few minutes later turned north towards the opening of Ucluelet harbor. Suddenly the sun started breaking through. A fantastic sundog highlighted a cedar covered outcrop to port, and the fog disappeared as if by magic as we motored past the fuel dock and tied up at the government dock just beyond. It had taken us 31 hours to motor from Astoria to Ucluelet. Clearing customs was a matter of a five minute phone call from the phone at the head of the dock. 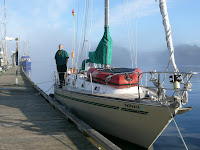 Like clockwork, the rest of the crew arrived at the dock after driving up from Portland. We were joined by my wife Muki and our old friend Leanne Anderson. It took several trips to transfer the massive load of food and beverges they had brought from home. We would eat like kings for the rest of the trip! We slipped our lines by 1200 and motored out of the harbor under cloudless skies and bright sun. The wind was perfect for a downwind sail into the heart of Barkley Sound.
Posted by Jay Kerr at 2:06 PM 1 comment:

This is a list of upgrades to Betty Lou. I will keep this listing updated, and will post detailed descriptions and photos where approriate. 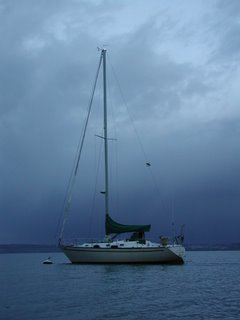 After a long search we have found our perfect cruising sailboat, a 1978 Tartan 37 named Rainbow. After looking at 40+ boats over a 3 month period, this boat jumped out as the hands-down best. Owned for the last 17 years by Tom Schneider of Seattle, Rainbow shows pride of ownership in her excellent condition, both cosmetically and mechanically.

We closed on Rainbow just before Thanksgiving, and moved her South to Olympia for the rest of the Winter. We'll use the next few months learning her inside and out, adding some equipment, and preparing her for a voyage outside and down the Washington coast to the Columbia River and our home port of St. Helens, OR.
Posted by Jay Kerr at 8:03 AM 2 comments: